It has been about a year, but this whole experience is just now sinking in….

I had not REALLY thought about it very much before today. I was too busy brainstorming, working, planning, and researching to think about the fact that I was actually illustrating a book. A real book that will be sold in stores, shelved in libraries, and (most importantly!) read by little children! I am now an illustrator! Eeeekkkk!

This was a brand new experience for me. I had a lot to learn about the process, and I thought I’d share with you some of the things I had to do.

The first thing I did was read the script and develop some ideas for what the characters might look like.

Next, I had to design the storyboard. A storyboard is just a sheet of paper that has small (very rough) sketches of every opening (or spread) of the book. I had to read the script and imagine what I thought the characters, background, and actions might look like.

After the storyboard was tweaked and approved by the publisher, I sketched a small drawing for the cover of the book. Once it was approved, I painted the full sized illustration (seen above in the first photo).

After the cover was completed, I began working on the inside of the book. I had a total of 32 illustrated pages when I was done.

The last step in the process was to scan and number all of the paintings to be sent to the publisher via the internet. 🙂

So now that it is done, the reality of what I have just emailed to a publisher has started sinking in. I think I was blocking the reality because it is a little intimidating, to be totally honest. I mean the pressure would have been too much if I had really sat and thought about it before I began. Now that I am finished with all of the paintings, I am very excited, a little nervous, and humbly thankful for this opportunity. It was a lot of hard work, but I really enjoyed it!

Liona’s Tattered Tutu will be coming out this summer, and I couldn’t be more excited! 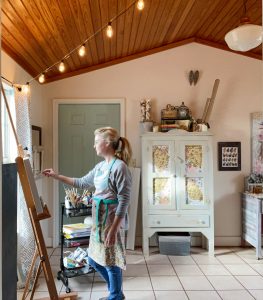 Amanda Hilburn is an artist who works primarily in acrylics, but also enjoys mixed media and watercolors inspired by the simple, stunning, artistry of nature; animals, flowers, water and more. Amanda’s colorful and whimsical creations are reflections of her view of the work of the greatest artist, God.

Get A Free Painting Lesson